Putting the polyadenylation complex together

One of the reasons for the slow pace of entries here has been the intrusion of, um, life into my life.  (Yeah, figure that one out.)  Earlier this summer, a paper from my lab was published in BMC Cell Biology.  Seeing as it’s Open Access, and since it has a bit of relevance to a theme introduced in this essay, I thought I would point it out here.

The story in a nutshell – one of the subunits of the polyadenylation complex is the so-called CPSF30 protein, or its yeast relative Yth1.  (Yth1 looms large as one of the few subunits in the Giardia complex.)  What Drs. Suryadevara Rao and Randy Dinkins did was study the places within the cell where CPSF30 goes, and what happens when one co-expresses this protein with other polyadenylation complex subunits.  They did this by attaching the various proteins to fluorescent proteins and following the fusion proteins using microscopic techniques.

The results corroborated other studies that detailed interactions between various of these proteins.  However, a rudimentary deletion analysis showed that these interactions by and large involve parts of CPSF30 that are not found in the mammalian or yeast proteins.  Since the CPSF30 interacts with the other proteins of interest in this study (the 160, 100, and 73 kD subunits of the cleavage and polyadenylation specificity factor, or CPSF) in other eukaryotes, it stands to reason that the interactions themselves must have evolved independently.  This in turn suggests a somewhat different trajectory in the evolution of the complex in different eukaryotic lineages.  It also raises the possibility that the different complexes may process and polyadenylate RNAs in subtly different ways.

Some pretty pictures and a link to a fascinating movie may be found beneath the fold.  Enjoy.

Localization of CPSF30 and a co-expressed nuclear marker.

Co-expressing CPSF30 with CPSF160 changes the distribution of CPSF30.

deleting the plant-specific N-terminus (the mutants are illustrated at the top) eliminates the effect of CPSF160 on the localization of CPSF30. 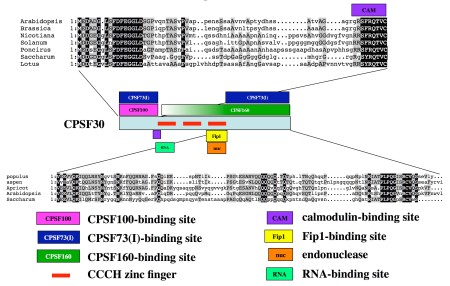 Figure 7 from the paper, showing the functional map of the Arabidopsis CPSF30. This map drawn from other studies and this report. A one-dimensional representation of the amino acid sequence (light blue box) is shown in the center of the figure. The color-coding of the various motifs is described at the bottom of the figure. Amino acid sequence alignments of the plant-specific N-terminal and C-terminal domains are shown above and below the functional map of AtCPSF30, respectively.

This entry was posted on Wednesday, August 26th, 2009 at 11:28 pm and is filed under About me, Evolution, Polyadenylation. You can follow any responses to this entry through the RSS 2.0 feed. You can leave a response, or trackback from your own site.