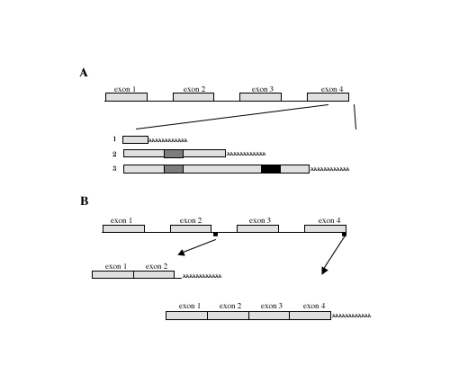 Figure 1.  Themes of alternative polyadenylation in plants.  A.  3’ microheterogeneity involving the same 3’-UTR of a gene.  A hypothetical gene is shown at the top; exons are depicted with gray boxes, and introns with thin lines.  The 3’-extremity is magnified beneath the illustration of the hypothetical gene, showing a typical pattern of microheterogeneity.  In this case, 3 possible 3’ ends are shown.  RNA 1 is the shortest and, for convenience sake, is a reference.  RNA 2 possesses an element (darker gray box) that, as an example, acts as a translation regulatory element.  RNA 3 possesses an additional element (black box) that serves as an RNA destabilizing sequence.  These are discussed in the text.  B.  Alternative polyadenylation that results in different exon content of the mRNA.  Illustrated is a hypothetical case where a pre-mRNA (top line) can be polyadenylated within an intron or at the “normal” end of the 3’-terminal exon. Polyadenylation sites are denoted with small black boxes beneath the pre-mRNA.  The possibility of alternative polyadenylation sites residing within non-terminal exons is not illustrated, but exists in a formal sense.

Also as shown in Figure 1, poly(A) site choice has the potential to affect gene expression in many ways.  The nature of the 3’-untranslated part of the mRNA (the shorthand found in the literature is 3’-UTR) may be changed, so as to affect the stability and/or translatability of the final mRNA product (Fig. 1A).  Polyadenylation might occur within introns (Fig. 1B), such that the protein-coding part of the gene is truncated.  (Usually, the part of an intron that is contiguous to the adjacent exon would possess at least one stop codon that is in the same reading frame as the exon sequences that encode the polypeptide.  Thus, the end result would be a mRNA with both a truncated open reading frame and a new 3’-UTR.)  Hypothetically, at least, polyadenylation could occur with a protein coding region; such events would lead to the production of so-called “non-stop” mRNAs, or mRNAs whose protein-coding regions extend up to and into the poly(A) tail (see reference 1).  These special RNAs are recognized and degraded by a dedicated machinery.

It turns out that alternative polyadenylation may apply to numerous genes; bioinformatic studies suggest that 50% or more of all mammalian genes have more than one poly(A) site (2), and that as many as 25% or so of plant genes may be similarly “afflicted” (3).   While the extent of the contributions of alternative polyadenylation is only now being studied, several “case studies” have been reported that illustrate the importance of alternative polyadenylation.  One of these involves the “switching” of immunoglobulin M heavy chain production from membrane-bound to secreted in the course of differentiation of B lymphocytes.  B cells make largely the membrane-bound form of the heavy chain, while differentiated plasma cells produce secreted form.  Both membrane-bound and secreted forms are encoded by the same gene, and the form that is produced is determined by alternative polyadenylation.  In B cells, polyadenylation occurs at a distal site (with respect to the 5’ end of the mRNA) such that two exons that encode membrane anchors are included in the final mRNA.  In plasma cells, polyadenylation occurs upstream and results in a truncated mRNA whose protein product lacks the membrane anchor; this protein still enters the endomembrane system, but ends up being secreted because there is no anchor to keep the protein on the membrane.  The following figure and caption is from a 1996 report by Takagaki  et al. (4) that helped to sort this out.

Figure 1. Expression of the μ Gene and of Splicing and Polyadenylation Factors during B Lymphocyte Differentiation(A) μ gene expression is regulated by alternative RNA processing. The exons encoding leader (L), variable (V), diversity (D), junction (J), and constant regions (Cμ1–Cμ4) are shared by both μm and μs mRNAs, while exons M1 and 2 and S are specific to μm and μs mRNAs.

A second example involves a mechanism for controlling the timing of flowering in plants.  Flowering is controlled by an elaborate system of inputs that converge on the flowering promoting-protein FT.  One of the several pathways that regulate FT activity involves the flowering repressing protein FLC.  FLC activity in turn is negatively regulated by (among other things – there is much more to this) FCA.  FCA gene expression is subject to an interesting form of alternative polyadenylation; briefly, when the “normal” distal site is used, full-sized FCA is produced, inhibiting FLC and thus promoting FT activity.  Polyadenylation may instead occur at an upstream site within an intron; when this happens a truncated FCA protein is produced, one that presumably does not inhibit FLC.  A figure and caption from the original report by Simpson et al. (5) that illustrates the regulatory network and the role of alternative polyadenylation follows this paragraph.

Figure 7. Model for FCA and FY FunctionWe propose that FCA (red) binds target RNA through its two N-terminal RRMs and tethers the 3′ end-processing machinery (pale blue) to this RNA via an interaction between the FCA WW domain and the PPLP domain of the 3′ end-processing factor, FY (blue). One target of this interaction is FCA pre-mRNA (red). Autoregulation of FCA expression presets the level of active FCA protein available to regulate the floral repressor, FLC (green), which is executed by FCA again interacting with FY. It is not yet known whether the regulation of FLC pre-mRNA is direct or if an intermediate RNA is involved. The activity of other regulators of FLC (such as FPA and FVE) is not controlled by FCA (at the RNA level, at least) and conversely, they do not regulate FLC by controlling FCA expression.

The bottom line of all of this – alternative polyadenylation is likely a wide-spread phenomenon and contributes to important fundamental processes.

This entry was posted on Sunday, July 27th, 2008 at 11:46 pm and is filed under Polyadenylation, Regulation of gene expression, RNA Processing. You can follow any responses to this entry through the RSS 2.0 feed. You can leave a response, or trackback from your own site.

One Response to Alternative polyadenylation